Want to see why? Watch the video below:

A history of the skatepark and project specific updates are posted below. You can view the design and Masterplan on the Skatepark Improvement Project Design Concepts page.

What is skateboarding all about? 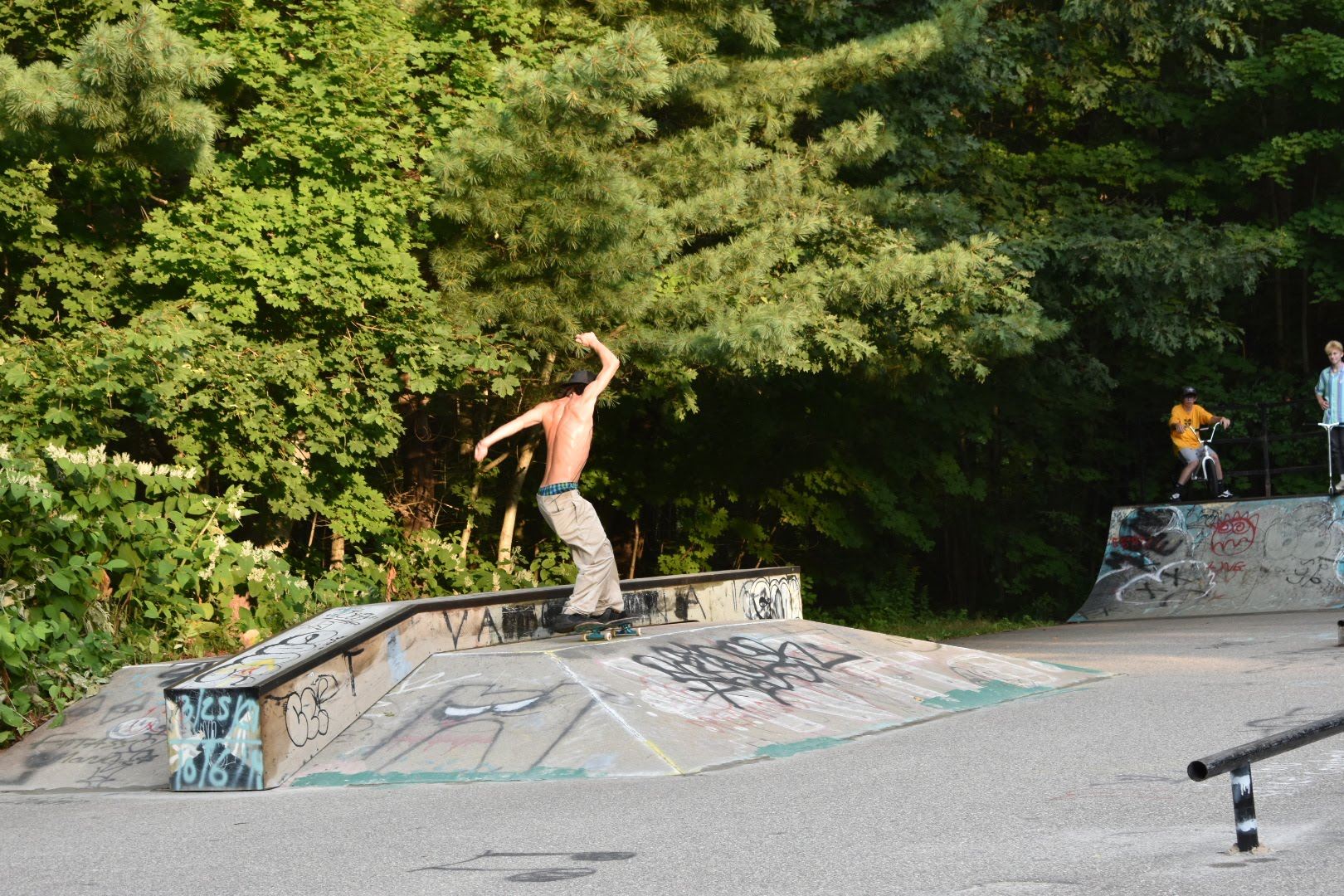 "The hallmark of skateboarding culture is that it is welcoming to anyone that approaches it with the intention of improving his or her personal skill. Class, race, gender, weight, and other hobbies are irrelevant provided that the participant’s enthusiasm for the actual act of skateboarding is genuine. In this way, skateboarding is egalitarian and inclusive. Because skateboarding is not a team sport, the success and/or enjoyment of skaters is not dependent on other skaters’ performance. In other words, an experienced skateboarder can recreate with someone learning fundamental skills as equals. There is nothing to gain or lose from seeing other people land a trick for the first time except for the joy of seeing them do it." (“Who Are Skateboarders?” Public Skatepark Development Guide.)

The Town of Kennebunk has a skatepark located on Factory Pasture Lane.

Anyone wishing to provide comments and feedback may do so via email, via Instagram or by contacting the Community Development Department.
View the most recent updates to the Skatepark Improvement Project.

In June of 2013, the voters of the Town of Kennebunk approved a capital appropriation of $100,000 for improvements to the Kennebunk Skatepark, which is currently located on Factory Pasture Lane.

To begin planning these improvements Town Staff, working in conjunction with local skatepark design and construction company WhoSkates, met with the public and stakeholders in a series of meetings to consider the project elements, including the desired features and components of the park. Town Staff were guided to explore improvements at the current location on Factory Pasture Lane, and in addition looked at 9 other town-owned properties as potential sites for a skatepark. After an evaluation and rating of each site it was determined that two sites, while still posing challenges for hosting a skatepark, rose to the top as options: Parsons Field (#1) and Factory Pasture Lane (#2).

Next, Staff met periodically with an ad-hoc group of interested citizens to explore the desired components for the park at Parsons Field and a concept design was developed by WhoSkates.
In February of 2015, a meeting was held with the direct abutters to Parsons Field to hear community input and feedback regarding this potential site.

The feedback indicated there were many areas of concern including parking availability, drainage, budget, proximity of cars to children, proximity of skatepark users to other park users (playground, basketball, baseball) and other perceived concerns such as noise, policing of the facility and liability.

In April of 2015, this information was presented to the Select Board, while at the same time a petition was brought forward by the citizens to go before the voters in June, which asked if voters favor allocating green space in Parsons Field for a skateboard park. On June 9, 2015, Kennebunk voters rejected the idea with a vote of 1,169 in favor and 2,766 against.

In the fall/winter of 2015, the Select Board debated whether the money originally allocated for improvements would need to be applied at the Factory Pasture Lane location, or if a new location could be identified for a new skatepark. Discussions included consulting the school department to determine if one of the schools could possibly add a skatepark to their location. 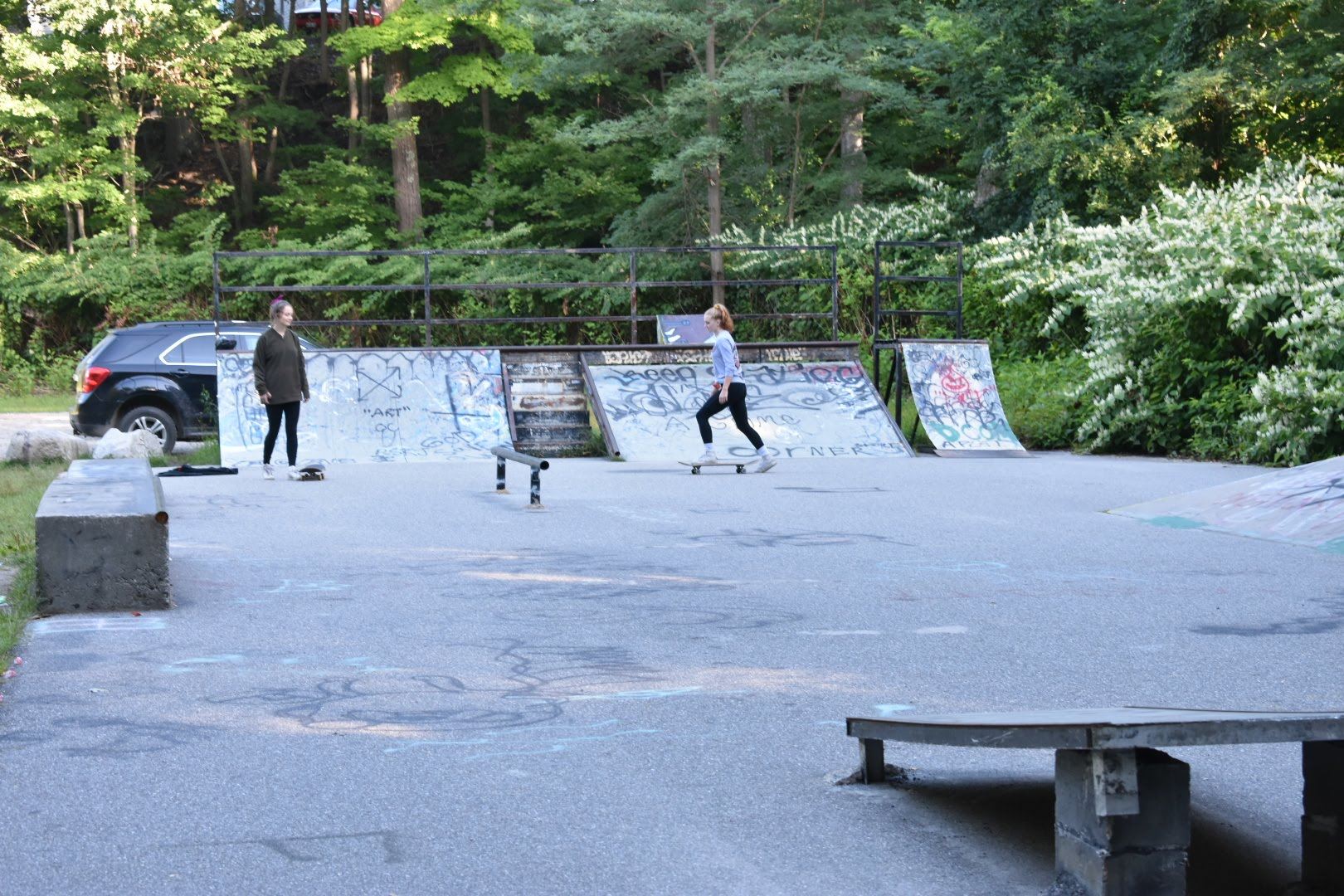 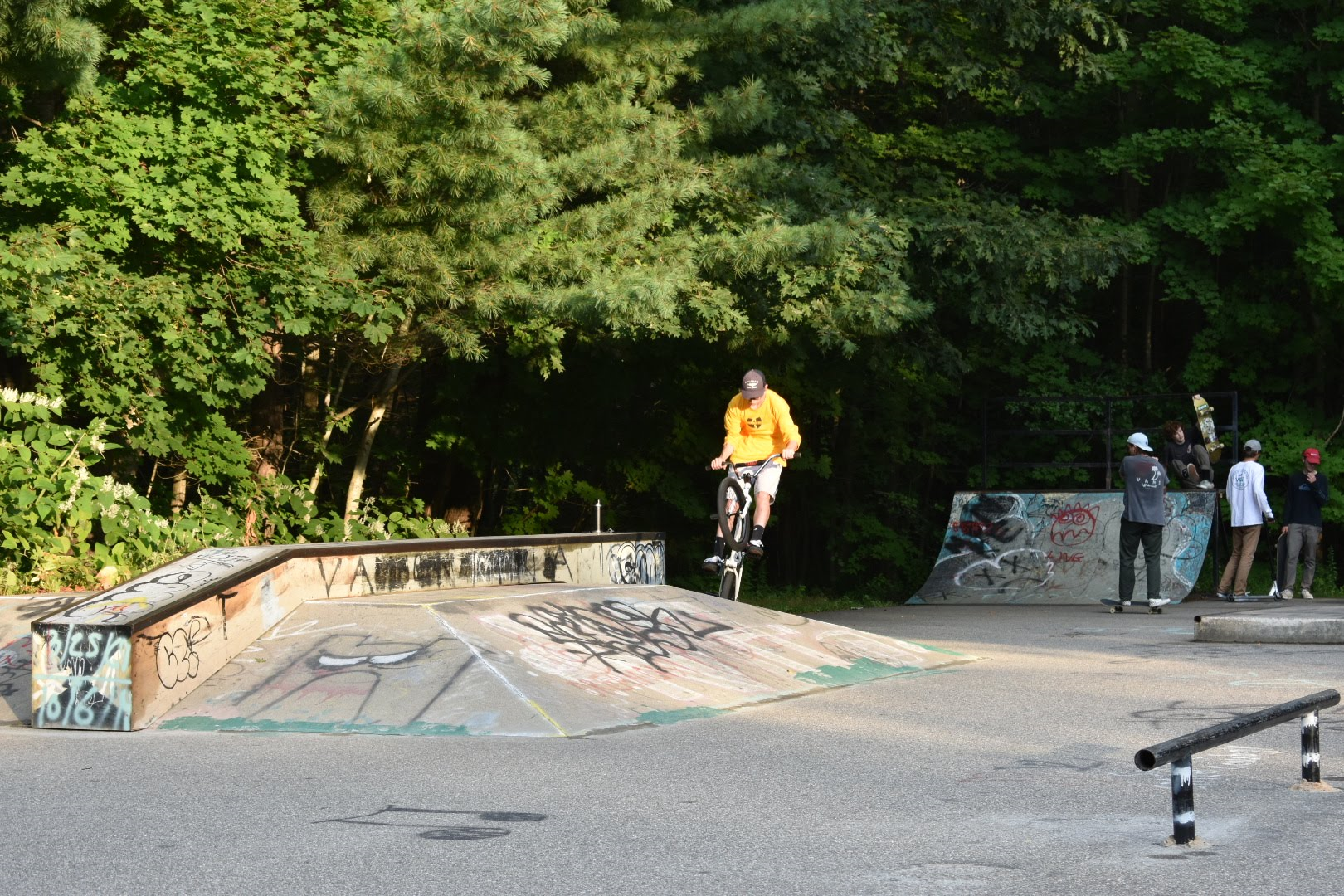 In September 2016, the Select Board voted to establish an ad-hoc committee for a skate park on Factory Pasture Lane. The stated objective of the committee was to develop an RFP for a skatepark. Submissions would be reviewed with a recommendation presented to the Select Board to contract with a design/build skatepark company who would work with the committee and interested residents to develop a park within the budget for the Factory Pasture Lane location.

In December of 2016, the Skatepark Ad-Hoc Committee was formed. The committee dedicated countless hours to meeting, developing an RFP, selecting a design/build firm and developing a concept plan. Once a concept plan was prepared the Committee continued to explore further possibilities for the skatepark. There was a desire and attempt to maximize the dollars allocated for a skatepark and address other identified recreational pursuits. This resulted in again researching alternative locations in town for a park and new concepts were brought forward to Town Staff and the Select Board. However, with no immediate additional funding available for an enhanced skatepark/recreational area, the project stalled as it grew beyond the scope of the originally budgeted amount of $100,000.

In August of 2019, the Select Board agreed that the Skatepark Ad-Hoc Committee had fulfilled their original goal of developing an RFP for a skate park and reviewing submissions to make a recommendation to the Select Board and decided to disband the committee. The Select Board asked Town Staff move forward with the remaining budget and pursue improvements to the skatepark.

Staff reviewed the work of the Skatepark Ad-hoc Committee, made multiple visits to the current skatepark and met with many of the core users of the park including skateboarders, bikers and scooter users. Informal get-togethers were held to listen to current park users and hear from them on a variety of topics including the history of the park, the evolution of improvements to the park, the sport of skateboarding, the ways the park is used, comments and suggestions for improving the park and the desire to be involved in the process going forward.

Through these conversations the skaters, bikers and scooter users advocated that any improvements be focused on the current skatepark location at Factory Pasture Lane. They cited the long history of skating in this location, and encouraged the Town to explore the possibilities there. They also encouraged the Town to engage with them in non-traditional, but more effective means such as in person, on-site meetings and social media. On the suggestion of park users an Instagram account was established and the public is encouraged to participate and follow the account: @sk8_kbk.

Also on the suggestion of park users, Staff visited other skateparks in the area to learn how other parks operate, understand usage, note desired features and gain awareness of skater culture. On the suggestion of skatepark users, these parks included Dover, NH, Sanford, Augusta, Bethel, Oxford Hills and Standish.

In late fall 2019 and winter of 2020, through connections made with skaters, bikers, scooter users, other municipalities and those in the recreation and skating community, the Town consulted Pillar Design Studios, a nationally-known action-sports design/build firm. Pillar Design Studios is recognized for creating facilities that offer distinctive site-specific designs, that are sensitive to both the client's wants and user's needs, creating aesthetically pleasing parks that all community members can enjoy.

Pillar created three concept designs for improvements to the skatepark in its current location and was set to meet with the public in March of 2020 to solicit feedback on those designs. Due to the COVID-19 pandemic that meeting was cancelled and discussions were temporarily put on hold.

On June 30, 2020 a public meeting was held via Zoom where park users provided feedback and suggestions after discussing three Design Concept options. Based on input from this meeting, a final Design Concept has been developed by Pillar. This final design incorporates the current asphalt surface with several new features, and includes the addition of a new concrete section to the park. A Master Plan has also been designed showing options for add-on features and future development.

In August 2020, site evaluation measures began to aid the preparation of construction documents in anticipation of publishing an RFQ for the build portion of the project. This work included digging test pits to determine the soils on site.

During the winter of 2020/2021, Town staff worked with the designer to refine the design concept and plan in light of the assessment of the site provided by a geotechnical engineer.

In April of 2021 an RFQ was posted to solicit skatepark specialty construction firms to submit proposals that would meet the specific needs of the project. Bids closed on April 29, 2021 and scoring will take place the week of May 3, 2021. Bid results and an award recommendation was presented to the Select Board on June 8, 2021. Based on scoring criteria, of the submittals received, Artisan Skateparks scored the highest and the Select Board authorized the Town Manager to enter into a contract with Artisan. Construction of the park is slated for Spring 2022.

The Town is still actively looking for additional funding sources which would allow for an enhanced park and additional phases of the proposal to be included. Anyone interested in contributing to this effort or with fundraising ideas in encouraged to contact us!