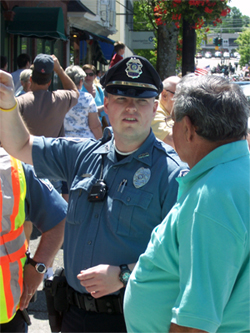 
The Kennebunk Police Department strives to work with all citizens to help combat problems and issues facing the community. Community Policing is a collaborative effort between a police department and the community it serves in identifying problems of crime and disorder, and involves all elements of the community in the search for solutions to these problems. It is founded on close, mutually beneficial ties between police and community members.

The origins of Community Policing date back to London, England, in 1829. The concept was derived by Sir Robert Peel, who once served as Prime Minister of the United Kingdom, as well as Home Secretary. It was during Sir Robert Peel's tenure as Home Secretary that he created the Metropolitan Police of London and developed nine principles to guide the police organization. Those principles were:
Community Involvement Programs
The Kennebunk Police Department has numerous programs that assist in maintaining an active role in our community. Members of the department participate in a number of community committees and organizations to include:


The Kennebunk Police Department is open to new and innovative ideas with current new program endeavors being developed. Check our website often for up to date Community Policing information. Should you have any community involvement suggestions, please feel free to contact Lt. Eric O'Brien at 207-604-1320, or by email.